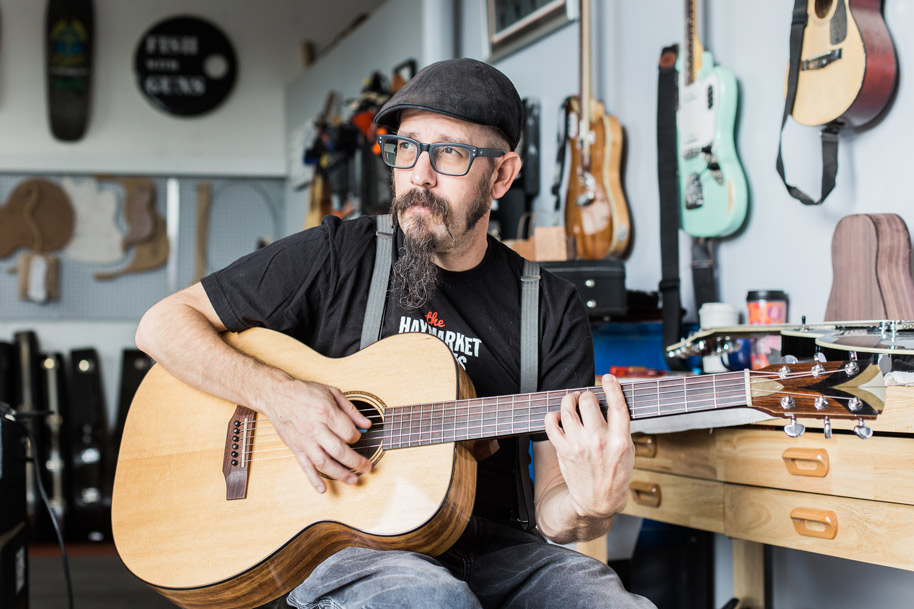 In his workshop at the intersection of Grand Avenue and 13th Avenue, Mark Allred shows me the first acoustic guitar he made as a student of the Roberto-Venn School of Luthiery. To the untrained eye, it looks impeccable. Allred, however, a certified luthier, is distracted by the miter alignment on the bottom, pointing out where the wood seams don’t join perfectly.

Most would need a Hubble telescope to notice the so-called blemish, but Allred’s passion for craftsmanship, plus a self-described case of borderline obsessive-compulsive disorder, magnifies his concern.

A deep respect for the finely built—and tuned—world of stringed instruments began as a matter of economics for Allred. A self-taught musician, he started playing in bands as a teenager in Southern California and couldn’t afford to hire someone else to repair his guitar.

“As a nerd, I’ve always liked to figure out how things work—and being poor led me to fixing my own guitar, learning how it was made and why it sounded the way it did,” Allred says. “I also have a natural talent for detail. As a kid, I always wanted to make things in the wood shed.”

Allred still repairs guitars (and ukuleles and banjos), but now he’s also building them for a living. His path to being a luthier was not a direct route—even though he used to drive past Roberto-Venn every day for three months as a delivery man for Dairy Maid. “I’d look at the school, but it didn’t really cross my mind at the time that I would go there some day,” says Allred, who’s also been a mechanic, a contractor and worked in the motorcycle-parts industry.

He finally made a career leap last year, enrolling in the nine-month program with urging from his wife, who said to Allred, “You can talk about guitars forever. These are your people.” A few months after graduating, in September 2014, he opened Allred Guitars & Guitar Repair, just a few doors down from the renowned guitar-making school.

Allred’s small but orderly workspace—located in the back of his wife’s cat-friendly interior design company—is filled with the tools of his trade: specialty chisels, files, planers, routers, jigs, fiberboard templates and lacquer. When he describes the process of guitar making, he sounds more like a structural engineer than an artisan of a centuries-old tradition. He explains how the grain orientation, the thickness of the wood, the bracing system and the individual parts contribute to a guitar’s overall sound.

It’s obvious Allred has a knack for the technical requirements of luthiery, but he points out that basic interpersonal skills come in handy too. “You don’t even have to be a great guitar player,” he says, “but you have to be a good listener when interacting with customers.”

Allred moonlights as the slide guitarist for the Phoenix-based punk grass band The Haymarket Squares and plays harmonica for the local rockabilly group The Shivereens. “I’m an OK guitarist whose bag of tricks isn’t as big as I’d like it to be, but what I have is pretty good,” he says, while plugging into a vintage amp for an impromptu performance of the Rolling Stones’ “Gimme Shelter”. “I know what a guitarist is talking about, for example, when he or she wants a sweet and melodic sound but also wants to dig in and play punchy and loud.”

The skill set to breathe musical life into an inanimate piece of wood and stretched strings is part of the creative thrill for Allred, who believes the sound of the perfect guitar only exists in his head. “I’m after many different targets, and there’s a lot of innovation and variation in building one,” he says. “A guitar can’t be everything; there’s always a compromise. But that’s what I love about it; you get to make it up as you go. Ultimately, the goal is that it sounds and plays well.”

Such was the case in Allred’s first major commission, a semi-hollow, five-string electric bass made almost entirely of mahogany that he built for Chuck Morris III of the band Jared and the Mill. “Not another one like it in the world,” Allred says of the instrument, which took four months to complete.

Allred is still getting used to the idea that he is a business owner, but he’s proud to play a role in the revitalization of local arts and culture along Grand Avenue, where his shop is located. The once-decaying district west of downtown Phoenix now includes several independent art galleries, eateries and music/comedy venues.

“I’m really excited to be part of Grand Avenue’s resurgence and the collection of artists, small business owners and the like who are part of a ‘handmade movement’ that is attracting people to the area who want to support unique businesses,” Allred says. “The only place to go is up on Grand Avenue. I think about what it will be in 20 years and I’m pleased to be part of that community now.”