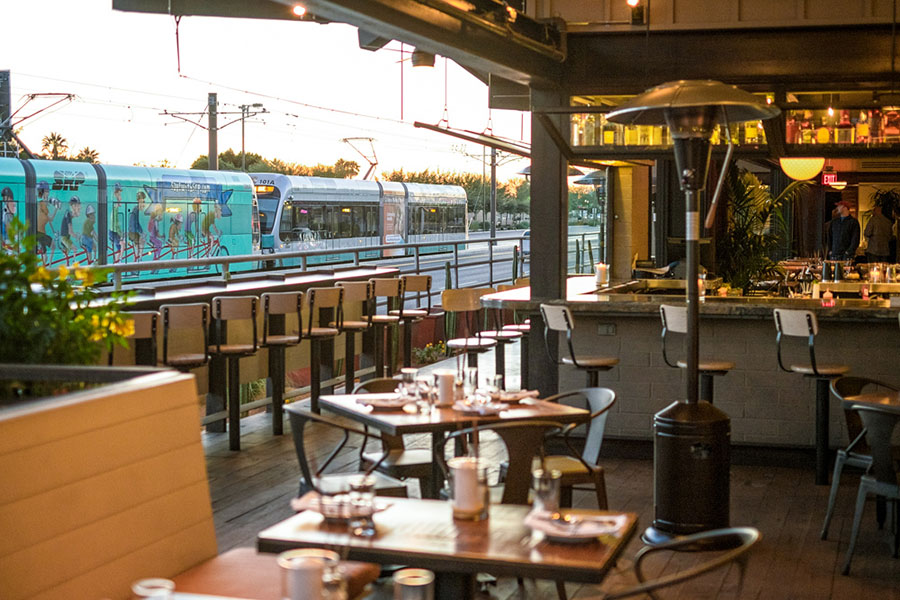 Who needs a car when a ‘conveyer belt’ can transport you between CenPho libations and indie food?

I needed something to shake up my Friday after-work routine. A pub crawl, I suggested to my friend, Liz. Down Central Avenue. On the rail.

I’m sure that when the 28-mile stretch of Valley Metro Rail began operating in 2008 from northwest Phoenix through downtown and on into Tempe and Mesa, transportation planners had lofty goals like removing cars from roads and offering an efficient, eco-friendly way to get Greater Phoenix commuters to work and school. But my goal was to explore the rail’s unexpected bonus prize—the bumper crop of indie restaurants and bars that have popped up in the Central Avenue corridor, within earshot of the whooshing rail cars. Liz and I planned to use the rail as a kind of conveyer belt, whisking us between those interesting stops.

Lest anyone ask, I need to explain that we are women of a certain age, and our version of a pub crawl means sampling food menus, with a few libations thrown in.

We started our urban exploration by parking at the free Valley Metro park-and-ride lot at Third Avenue and Camelback Road. We then caught the southbound rail at the adjacent station. Gliding past the Heard Museum, Phoenix Art Museum and Arizona State University’s downtown campus along Central Avenue, we headed to our first stop, Bitter & Twisted, near the 1st Avenue and Jefferson Street station.

Opened in 2014 by Scottsman Ross Simon, a master mixologist, Bitter & Twisted specializes in cocktails vintage and new, made with carefully curated liquor, freshly squeezed juices, perfect ice and handmade syrups. Us? We ordered food first, sharing a butternut squash salad and spicy, pork belly-laced noodles as we soaked up the setting—a stripped-down, loft-like space on the first floor of the 10-story Luhrs Building, built in 1924 by Trost & Trost and once the state’s tallest building. And, yes, we did sample the drinks, trying a nonalcoholic cucumber spritzer (pace yourself!) and a retro Hemingway daiquiri composed of rum, grapefruit and lime juices, and maraschino liqueur.

Our next rail stop, at Central Avenue and Van Buren, yielded Seamus McCaffrey’s Irish Pub, a cozy, everyone-knows-your-name tavern that celebrates all things Gaelic. We plopped down at the bar for nonalcoholic beers and a snack of chips and gravy. Behind the bar, white Christmas lights illuminated row after sparkling row of whiskey bottles, attesting to the pub’s fame as having the broadest selection of Irish whiskeys and scotch in the city.

Seamus McCaffrey’s has a patina like it’s been around for 100 years, even though it’s only been here since 1990. Each St. Patrick’s Day, the pub closes down the adjacent street, setting up a tent with extra bars and a stage for bands, then offering a sea of Guinness, corned beef and cabbage, and plenty of bagpipers and step dancers.

The luck of the Irish was waning, so we headed north on the rail. It’s standing room only now, because our rail pub crawl coincided with a monthly First Fridays art walk, much of which is concentrated along the galleries and venues on Roosevelt Street, just east of Central Avenue. Sure enough, at the Central Avenue and Roosevelt rail stop, half the riders exit. I’m just glad we didn’t decide to do the pub crawl on the Saturday before this year’s Super Bowl, held in Glendale, when a record 126,000 rode the rails, more than triple the average daily ridership.

We rode to Central Avenue and Thomas, then walked a few blocks to Durant’s, a Phoenix legend since it opened in 1950. Liz worried out loud about the windowless facade on the low-slung pink building, and the fact that there was nobody coming in or out of the front door. “It looks abandoned,” she fretted, until I pointed out that regulars enter this steakhouse through the back, via the spotless kitchen. Inside the restaurant, it looks much the same as when the original owner, Jack Durant, ran the joint—leatherette booths, red flocked wallpaper, low lighting and a bar where Phoenix power brokers rub elbows and make deals. Not quite hungry enough for Durant’s ribeye dinner or sauteed chicken livers, we had some wine and oysters Rockefeller.

We trundled north on the rail, back to our starting point, but this time walked a short distance west to The Newton, a renovated mid-century-modern building  that now houses Changing Hands, a large indie bookstore; Southwest Gardener, a garden accessories shop; and Southern Rail restaurant, our target destination. The building, opened in 1961 by restaurateur Jay Newton, was once home to his prime rib-centric restaurant, Beef Eaters. The current owners salvaged many of the original architectural details, such as chandeliers and wood paneling, and wove them into the airy, light-filled new settings.

Southern Rail anchors a big chunk of The Newton, and gets its comfy look from the original Beef Eaters booths. Chef Justin Beckett mixes a Southern menu, lubricated by a generous offering of small-batch bourbons, with a primo location overlooking the rail line (hence the name). The place was buzzing, but we managed to snag a table on the patio, a popular spot on a balmy night. We ordered some ham hock-flecked collard greens and the house-smoked trout, and indulged in a round of rail runners (bourbon, Lillet, lemonade and bitters).

By 9 p.m., Liz and I decided it was time to start winding things down and hopped the rail south one stop to Central Avenue and Campbell, for coffee and dessert at Lux, a favorite neighborhood hangout. The coffeehouse morphs into a bit of a bar scene after dark, serving wine, beer and cocktails along with teas and espresso drinks. By the time we arrived, well into a Friday night, the place was packed and people—from high school kids and young families to hipsters and retirees—roosted everywhere, their faces illuminated by the glowing light of laptops, smart phones and e-books.

Despite the technology, conversations were loud, and the sweet aroma of coffee and pastries was heady. We perched ourselves on a low-slung leather couch and ordered coffees and a peanut-butter-and-chocolate ganache torte to share.

In the end, the all-day pass on rail cost us each $4. It was easily worth its weight in calories.

More Stops Along The Way