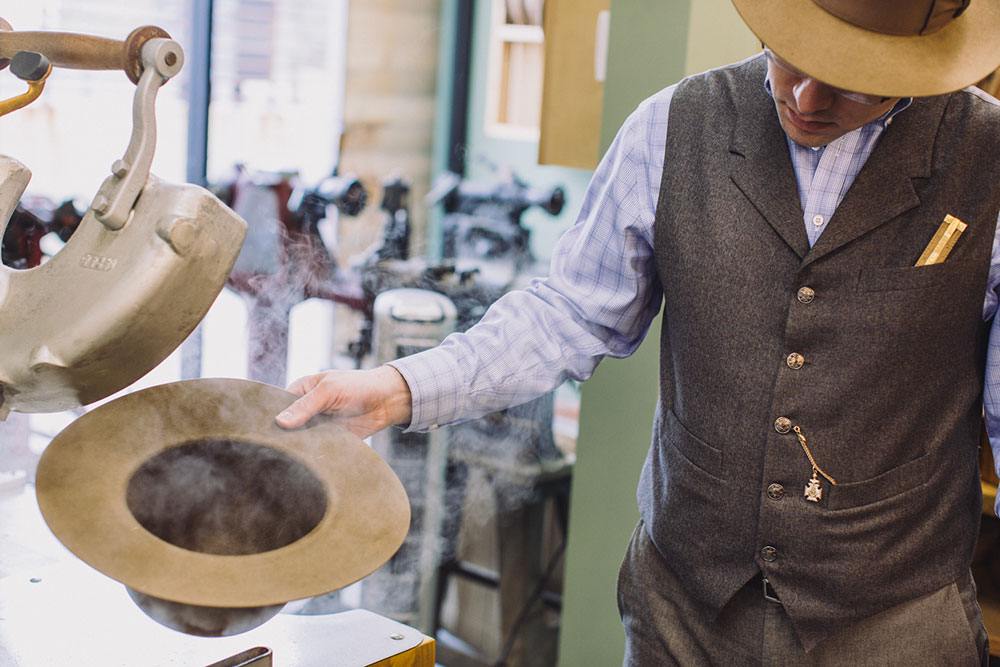 At his shop in the cowboy town of Cave Creek, Eric Watson crafts hats that last a lifetime.

In the town of Cave Creek, north of Phoenix, cowboy hats are commonplace.

“It’s not just ranchers that wear them,” says Eric Watson, owner of Watson’s Hat Shop. “It’s also ‘kinda’ cowboys and weekend cowboys, along with the horse community. It’s a large percentage of our business.”

That’s no surprise, given the historical roots and romance of cowboys here in the West. What’s unexpected is that this master milliner is a millennial.

Watson is 33 years old. Educated as a commercial pilot, he has a gentle, courtly demeanor and traces his love of hats to a childhood fascination with Indiana Jones. Watson completed his first custom hat at age 22; he estimates he’s fashioned 1,500 to date.

Along with cowboy hats, Watson crafts custom panama hats, fedoras, bowlers and Aussie hats. He does not skimp on materials. His creations are made of Cuenca straw sourced from the Andes (the tight weave keeps the strong Arizona sun out), as well as beaver and fur felt blends. Prices start at $350 and rise to $5,000. These are investment pieces, Watson says, because his hats will last for several generations.

Watson’s first Cave Creek customer was a Merrill Lynch broker who arrived in a limo; he bought two hats with hatbands and two hatboxes—a $1,000 sale that was a harbinger of future success. Since then, Watson has made toppers for Kenny Chesney, Al Roker and Justin Timberlake. Watson also made an unusual hybrid for Chef Bryan Dooley of Bryan’s Black Mountain Barbecue: a toque with a western brim.

To keep up with demand—his clientele extends beyond Arizona’s borders—Watson recently moved to digs in Stagecoach Village that are more than twice as big as his original shop, which he opened in October 2012. Watson designed and outfitted the new shop to his exacting specifications. It harkens back to an earlier time, with big windows, copper-tin ceilings, period ceiling fans and lots of milled wood.

Watson uses millinery equipment from the late 1800s and early 1900s; he is mostly self-taught. There are some 65 steps to making a custom hat, and he is happy to share how he does what he does with customers. A lot of it, frankly (and pardon the pun), is over my head. But it’s fascinating to see old Singer sewing tables, wooden hat blocks and an antique conformitor—a vaguely sinister metal device used to measure heads.

What’s clear to me—and to anyone who meets Watson—is the passion he brings to his work.

Having well-known patrons is a plus. But what’s deeply gratifying to him is the restoration work he does, whether it’s fixing another milliner’s mistakes or refurbishing well-worn hats. He says a recent client cried after he presented her with a reworked hat that was a family heirloom. Such a response, Watson says, is not uncommon.

“We are preserving memories,” he says.

Dawn Reinbolt, Watson’s energetic mother, works with her son in the shop and plays a pivotal role in its success. Both were new to Arizona from Ohio and looking for a retail location when she learned about Cave Creek while reading an “old horse magazine.” One of her old boyfriends bankrolled the initial business, a loan long ago repaid.

“What Eric does is way bigger than making hats,” she says. “It’s a ministry.”